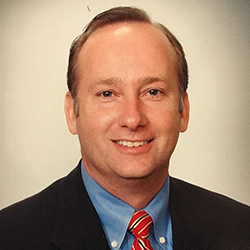 For 22 years, Mark worked in Corporate Banking for SouthTrust Bank and Regions Financial Corporation serving as SVP for National Corporate Banking. In 2006, he left the banking industry to serve as President of Synaflex Rubber Products Company.

Throughout his career Mark has been involved in several different civic organizations. He has been a member of the Rotary club for 25 years and has served in every office including President and a member of the Board of Directors. He has also served in a fund-raising role for the United Way and Boy Scouts of America. Mr. Burr has served on various Boards with the most recent being the U.S. Industrial Manufacturers Association.

Mark has been a member of The University of Alabama Alumni Association since his graduation in 1987. He has served as President, Treasurer, Secretary and as a National Vice President. Currently he serves on the Board as Chair of its Scholarship Committee.

Mark has been married to Leticia Culver Burr for 22 years and they have 2 boys, Jacob and Samuel. The Burrs are members of Shades Mountain Baptist Church in Birmingham and their children attend Briarwood Christian School in Birmingham.


Warning: Invalid argument supplied for foreach() in /home/customer/www/justkeepsmiling.org/public_html/wp-content/plugins/ht-team-member/template/single-htteam_member.php on line 39